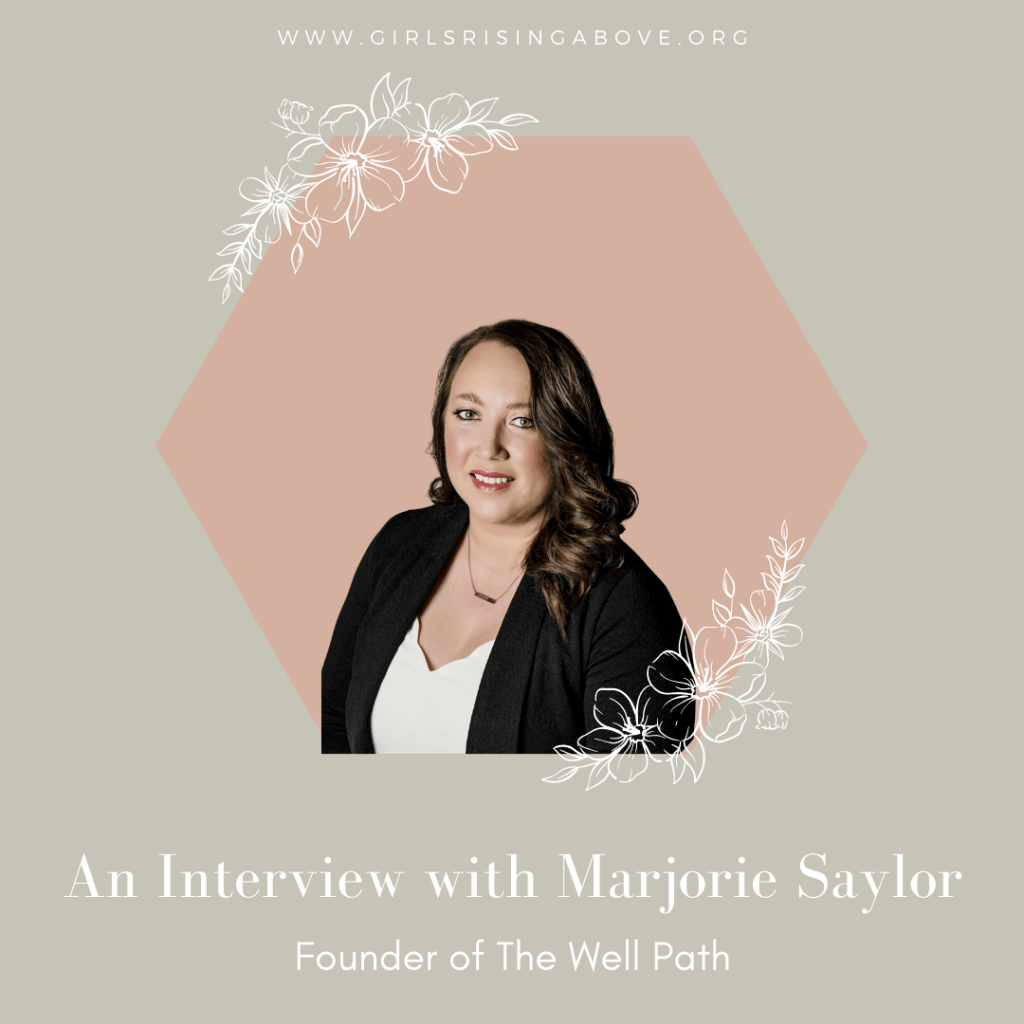 I see that you’re the founder of The Well Path. Can you tell us a bit more about it? How did it become what it is today?

The Well Path was founded in 2017, so it’s not that old – it’s only 3 years old. I [started because I] realized that there’s more of a need for support for sex trafficking survivors. I’ve been working with other nonprofits to house people for up to 2 years. When I graduated college I started the program. Now we have emergency hotel shelters, and can pay for emergency airfare. Our first year we provided 50 nights and 200 our second year, and this year we’re at almost 300 nights. It continues to grow all of this year – we’ve seen a much higher need of services due to covid.

I wonder if the Coronavirus has had any impact on the amount of trafficking. Have you seen a change in the amount of women reaching out for help? Do you think COVID has impacted the way traffickers exploit?

Their tactics are still the same. It didn’t change up a whole lot as far as how they’re interacting with victims but we have definitely seen at least a double increase in need for support.  We haven’t really seen a reduction in trafficking because of covid so it’s not stopping that, but we definitely are seeing people that are more concerned. There is no stopping the trafficking. We are seeing more people who are concerned. Covid is a new excuse for people to settle down and figure their lives out.

It definitely goes without saying that coming out of trafficking is a great feat in and of itself. How were you able to cope with it all during and after your experience?

During my last trafficking experience – because I have experienced several forms of trafficking/exploitation throughout my life – the vulnerabilities that pushed me into that was early childhood sex abuse at home, growing up in a home with domestic violence, and I ran away from home at 15 and ended up in situation after situation of exploitation. Primarily, labor trafficking was my experience, although I did have a period of time where I was exploited through the adult industry… until my life was threatened and I decided to walk away from that. My last abuser was also a labor trafficker and he was also my daughter’s father. The relationship started off as a romantic relationship and then a couple of months into it it turned into something completely different and I was trapped. He threatened to hurt my family if I left, so I was stuck with him and I became pregnant. He forced me to use drugs and he beat me. The way I coped with that, I feel like it took a lot of effort to fight the effects of the drugs. I remember constantly trying to control my heart rate and my breathing, and I’ve learned how to meditate and that was pretty much all I could do. I didn’t realize I had a lot of other options. At the time I felt like I was stuck with him. I had to stay with him, otherwise my family would be hurt.

Looking back now, I realize that I could have left. I just tried to survive it. Six months into my pregnancy I couldn’t take it anymore and I tried to end my life. That wasn’t the plan for my life. I ended up having my daughter a week after she was overdue, perfectly healthy. 11 months later I was still with my abuser. Her father. It was until she started reacting negatively to the abuse I was enduring where something switched in my mind and I got that motivation to snap out of the helplessness and hopelessness I was in. By the way, it took a few days to get out. Once I made the decision to leave, I left and I never went back. She was my motivation. That first year I dove into spiritual healing. I wanted to better myself to better her – my main focus was her. One thing led to another and I got connected to different programs and resources, and it wasn’t until maybe two or three years out that I finally started to get help for PTSD and the other mental health components.

A recurring theme in people who have been trafficked and exploited is the feeling of guilt. They often find themselves thinking that it’s their fault that they’ve been trafficked. Did you ever experience any of these feelings?

In regards to experience with sex trafficking, I felt a lot more guilt and shame than I did with labor trafficking. It impacted me more spiritually, although mentally the impact is the same because it’s stress after stress on my body. Spiritually the sex impacted me greater. Even though it was a brief amount of time, it definitely impacted my life and that’s why I choose to work with sex trafficking survivors today. Initially I was predisposed to exploitation because I was sexually abused as a child, so when you experience that type of abuse, you make a connection that relates sex to love. You give yourself away wanting for and looking for love. When it isn’t returned, you wonder what’s wrong with you. Then you realize you’re just wanted for sex. In a way to empower yourself you try to take control of the situation – you get to choose who, why, when and where and how much money you can make off of this. You have to tell yourself you’re choosing to do this to cope with it and be okay with it. I was never okay with it. I had to drink and sometimes use drugs to get through it. Shame and guilt is something that’s really hard to let go of. It keeps you in it. At the same time it keeps you stuck in the “this is all i’m good for” mindset.

When you have someone who’s coercing you and manipulating you it adds a whole lot to it. It starts off as a way to empower yourself and it ends up being exploitation. It was hard to let go of, and it was hard to see myself as a valuable and worth something, or capable of the things I can accomplish today. Never in a million years did I think that I would be able to do the things I’ve accomplished today. That’s the shame and guilt that tells you that that’s all you’re good for. Why do you stay in the situation of abuse? In my case, you feel helpless in a situation where you feel like your abuser has full control. You feel like they’ve completely isolated you from friends and family. You have no resources to reach out to or you don’t want to admit it because you feel like it’s your fault. It’s your mistake. Your choices. There’s also an element of family and friends that weren’t really there, so you really don’t  feel like you have anybody to reach out to. Reaching out to a perfect stranger is more ideal. You’re constantly bombarded with this reality that’s being put on you that the trafficker is the only one who wants you and who can put up with you. In a situation where you’re forced by threats against family, yourself, or friends, you’re even more in a position of helplessness because you’re afraid of other people – or even yourself – being hurt on your behalf. That’s another reason why you stay. I also had good credit before him, but that was completely ruined afterwards, so I had no way of providing for myself. When I did leave, I had no idea how I was going to sustain myself. I was lucky enough to reach out to family and get a roof over my head. That is what got me to where I am today. I was able to get on welfare and I went to food banks. I went through college on my own without student loans. I became very resourceful. When you’re driven enough to not go back to that kind of a life, you will do whatever it takes.

I’m curious to know more about how traffickers are targeting and exploiting victims, and how we can identify some signs that someone is at risk for being trafficked or is already being trafficked?

They know what to look for and what questions to ask. I told my last abuser my life story the first night. He knew what to use against me. He knew what to say. I thought I was with someone who was going to make my dreams come true and it was all a lie. When you’re looking for love and companionship, you’re willing to look for it wherever. He paid attention to me. He wanted me 24/7. Nobody had ever wanted me around the whole time, and so I thought “This is love.” They learn really quickly what your needs are and try to make it seem like they’re being met. That’s called coercion. That’s where it starts.

How can people who haven’t experienced anything like this help those who have?

Mainly, I think changing perspective on how someone ends up in a situation like this to begin with. Instead of looking at someone and thinking, “Wow, their life is a mess, they made bad choices…” or whatever, try thinking what got them there. We need to see more empathy. We need to see more people caring. We need to talk about it and educate each other. We can’t protect our children and we can’t teach men how to appreciate and value women without education, so talking about the issue is definitely a number one.

Click HERE to learn more about The Well Path and the amazing work they are doing.

I AM the Painting on the Wall

Personal Tips for Coping with a Trauma

This site uses Akismet to reduce spam. Learn how your comment data is processed.